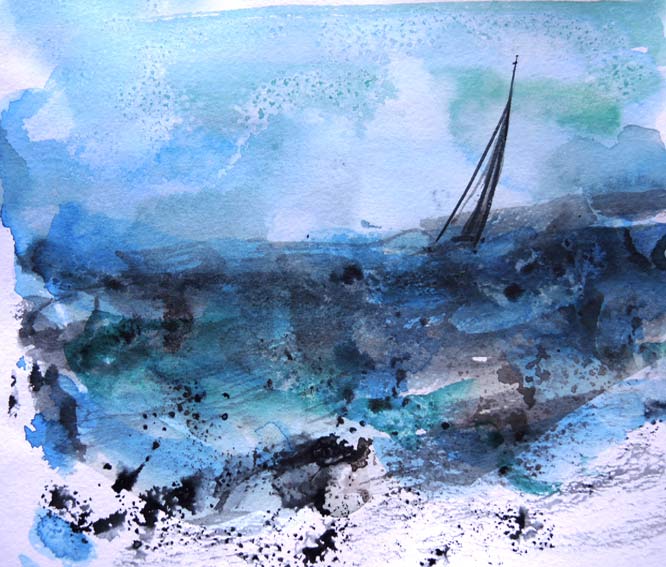 The first film I ever saw was one called “The adventures of Marco Polo” so I admit that I was more than a little excited as we sailed into the port of Korčula, a windswept Croatian island in the Adriatic Sea.

Korčula was the birthplace of Marco Polo, the explorer. His house is still there, overlooking the narrow streets and stairways of the medieval town, and the dark taverns too where he is said to have planned his travels and boasted of his many foreign adventures.

There is a map of his travels there, on the wall outside his house, and it names all those exotic places (see below), places he had visited while in the service of Kublai Khan but… 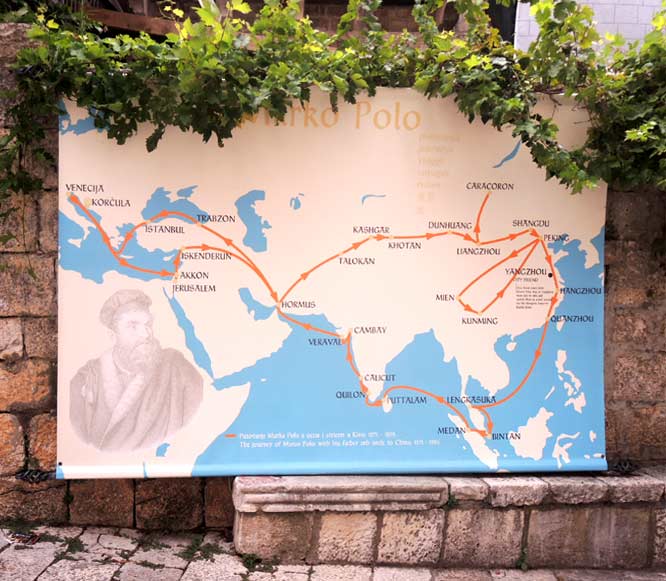 But there was a hoary old sailor on our boat, had sailed the Spanish Main, “I pray thee, put into yonder port”, he said, “for I fear a hurricane”.

Well, he was right about the hurricane but it was something else he said that upset me more. He blew a whiff from his pipe (and a scornful laugh laughed he) and he said that all that stuff about the travels of Marco Polo was just ‘auld bilge water’.

He said that Polo had travelled no further than Persia and that all those stories about China were simply based on tales he’d heard from Persian travellers.

I suppose that I could be accused of some exaggeration meself from time to time (Did I mention the height of those stormy seas? or the strength of that mighty Bora wind?) but Marco Polo the explorer? – No, a thousand times No. 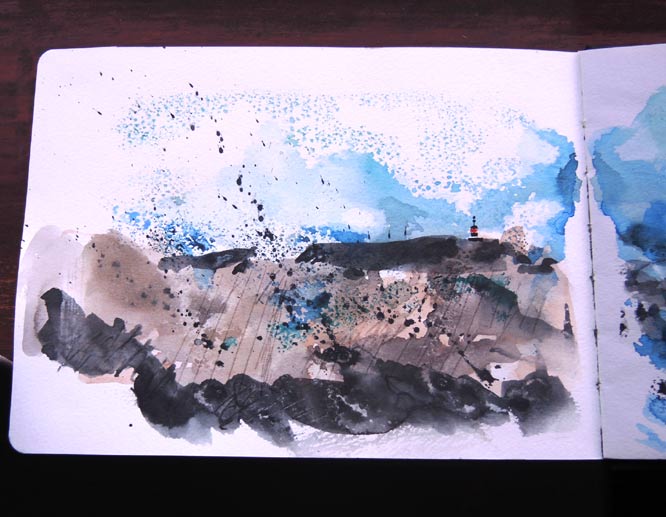 Ah well, whatever about the bold Marco, but it really makes me mad when I think of “Fake News” (and the one guy in particular who made it popular). It is such a crime to have made all stories suspect, so that nowadays, we can be sure of nothing – and brazen lying is now deemed acceptable. Well it’s not, in my book.

Now more than ever, we need leaders who will stand up for truth and justice.

PS – and yes, I was quoting from Longfellow’s poem: “The Wreck of the Hesperus”

Fáilte - Welcome to the website of visual artist Eoin Mac Lochlainn. Regular stories about the Irish art scene and more of my musings.....

Hello, I am an Irish artist and I’ve been writing a weekly art blog since July 2010. The blog is basically about the life of the artist - my interests, my inspirations, some stories about the art scene in Ireland, other musings... I'm gradually adding pages which will eventually form an archive of all my art exhibitions since my graduation from NCAD, Dublin in 2000. But first of all, I’m a practicing artist. I graduated from the National College of Art and Design in Dublin in the year 2000. I won The Golden Fleece Award in 2008. In 2010, I was shortlisted for the Davy Portrait Award and I won the ESB Keating McLaughlin Medal at the Royal Hibernian Academy Exhibition. I am one of the founder members of the artists' collective called Tondo. We have had exhibitions in all sorts of strange places – in a railway station, a lighthouse, a public park, a crate – but we also had a show in The National Gallery of Ireland. I have had several solo shows in Ireland, and have participated in various group shows in Ireland, England, France, Belgium, Georgia, and China. More information about my work can be seen in the Exhibitions section of this website, at: https://emacl.wordpress.com/exhibitions/ and also at the Olivier Cornet Gallery in Great Denmark Street, Dublin 1 and at: http://www.oliviercornetgallery.com/