Did you know that the largest Viking Cemetery outside of Scandinavia was at Islandbridge in Dublin? This was discovered during the railway building there in the 19th century.

The warriors were buried with their weapons, the women with their brooches, and trades people with their folding weighing scales. And just in case, you think that the Vikings were only a bunch of wild and uncouth hooligans, let me put you straight in that regard.

Think of all those Viking combs that were discovered – those combs that were so carefully manufactured and intricately carved – they tell a different story. These Vikings were clearly concerned about their appearance. They would have been the hipsters of their day… 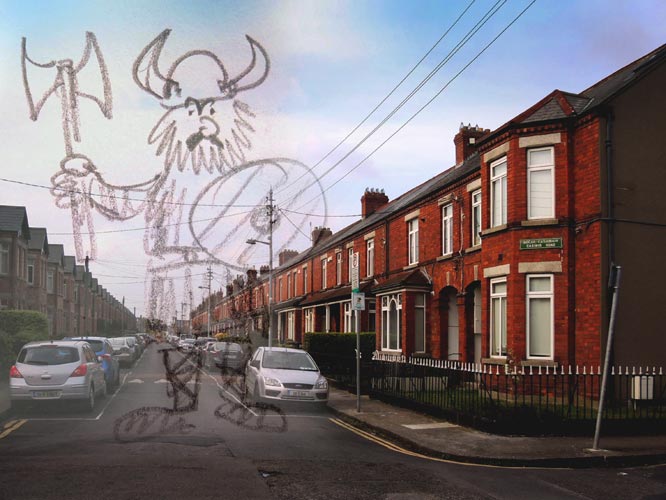 And helmets with horns? I’m afraid I have to tell you that there was no such thing! The above portrait will have to be adjusted accordingly. Bah, Hollywood! There’s a lot more information about the real Vikings at the National Museum in Kildare Street.

A group of us from Harold’s Cross had the privilege recently of being invited into the museum for a special visit. Of course, we were already familiar with the Vikings in this area, the original Harold being a Viking, don’t you know. They say that the ‘cross’ in the name of the village refers to a cross that marked the boundary between Harold’s lands and the lands of the Bishop of Dublin, way back when.

And of course, the village of Harold’s Cross is in the Poddle valley. People don’t think much about the Poddle these days, it’s just a little stream that is mostly culverted (covered over), but in Viking times, it was an important tributary of the river Liffey and it defined the southern and eastern sides of the Viking town of Dyflin (Dubh Linn – or nowadays: Dublin). 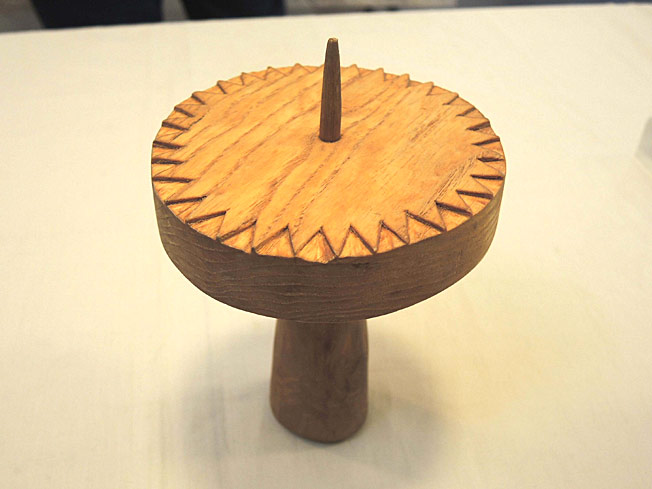 So what would you say the object above is? – Well, it’s a portable sundial, used as a navigational aid in the longboats. This is one of the items from the museum’s “handling collection”.  So much to discover…

I’ll be returning to this museum very soon. I haven’t even mentioned the gold yet!

Fáilte - Welcome to the website of visual artist Eoin Mac Lochlainn. Weekly stories from the life of the artist in Ireland...
and your comments are always welcome!

Hello, I am an Irish visual artist and I’ve been writing a weekly art blog since July 2010. The blog is basically about the life of the artist - my interests, my inspirations, some stories about the art scene in Ireland, other musings... I'm gradually adding pages which will eventually form an archive of all my art exhibitions since my graduation from the National College of Art and Design, Dublin in 2000. But first of all, I’m a practicing artist. I won The Golden Fleece Award in 2008. In 2010, I was shortlisted for the Davy Portrait Award and I won the ESB Keating McLaughlin Medal at the Royal Hibernian Academy Exhibition. I am one of the founder members of the artists' collective called Tondo. We have had exhibitions in all sorts of strange places – in a railway station, a lighthouse, a public park, a crate – but we also had a show in The National Gallery of Ireland. I have had several solo shows in Ireland, and have participated in various group shows in Ireland, England, France, Belgium, The Netherlands, the USA, Georgia, and China. More information about my work can be seen in the Exhibitions section of this website and also at the Olivier Cornet Gallery in Great Denmark Street, Dublin 1 see: https://www.oliviercornetgallery.com/