Drones, serious quiet and birdsong at the Pearse Museum 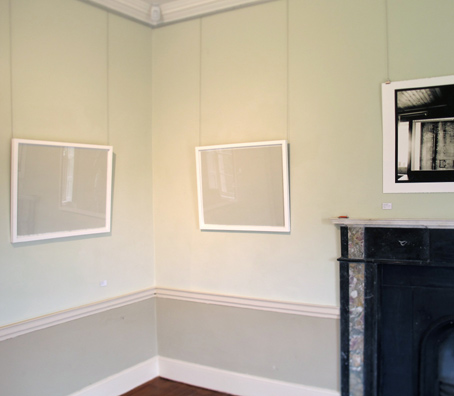 Yes, when I first saw Aoife McGarrigle’s two prints for the exhibition, I thought that it was a mistake, that what she sent over from Scotland was two blank sheets. But no, they were just very subtle, very quiet pieces, very powerful. Her recent work has involved researching the decline and eventual demise of the Irish language in the Bluestack Mountains region of her native Donegal. After visiting the Pearse Museum in Rathfarnham, she decided to use the statistics of the growth and decline of the language in her artwork, and also incorporate the quote by Patrick Pearse:  Tír gan Teanga, Tír gan Anam  ie: A land without a language is a land without a soul.

It was nearly impossible for me to me to reproduce them here. As you see above, the two prints blend so completely into the wall, becoming part of the very fabric of the building, but close scrutiny reveals a most delicate map of Ireland, with the Gaeltacht areas highlighted. You’ll just have to come to see them at the exhibition, entitled The Palimpsest/ Rianú Project, which opens this Saturday and runs until the end of November. There are several other intriguing works in this exhibition, including drone’s eggs and a drone’s nest by Claire Halpin, and an installation by Brian Fay which would also be very difficult to reproduce (more about that in another post) but in the meantime, here’s a sneak preview of my piece.

It’s a diptych called “Lon Doire an Chairn / The Blackbird of Derrycairn”. Pearse believed that it was good for his students to grow up with an appreciation of nature and this was one of the reasons why he chose St Enda’s as the location for his school.  He was also very interested in Celtic Mythology. The old Gaelic poem from which I got the title is attributed to Oisín of the Fianna, and it encapsulates many aspects of Pearse’s philosophy of education.

In the poem, Oisín extolls the wonders of nature and compares and contrasts them with the discipline and order of monastic life. He writes that he has never heard a sweeter sound than the song of the Blackbird as it tends its nest and he prefers this sound to the mournful sound of the church bell. The Romantic yearning for the freedom and joy of the natural world is juxtaposed with the new ‘civilising’ culture of the monks.  Now, far be it from me to be taking a stand against my teachers – but you’d have to admit that the song of the blackbird brings joy to the world.

Fáilte - Welcome to the website of visual artist Eoin Mac Lochlainn. Weekly stories from the life of the artist in Ireland...
and your comments are always welcome!

Hello, I am an Irish visual artist and I’ve been writing a weekly art blog since July 2010. The blog is basically about the life of the artist - my interests, my inspirations, some stories about the art scene in Ireland, other musings... I'm gradually adding pages which will eventually form an archive of all my art exhibitions since my graduation from the National College of Art and Design, Dublin in 2000. But first of all, I’m a practicing artist. I won The Golden Fleece Award in 2008. In 2010, I was shortlisted for the Davy Portrait Award and I won the ESB Keating McLaughlin Medal at the Royal Hibernian Academy Exhibition. I am one of the founder members of the artists' collective called Tondo. We have had exhibitions in all sorts of strange places – in a railway station, a lighthouse, a public park, a crate – but we also had a show in The National Gallery of Ireland. I have had several solo shows in Ireland, and have participated in various group shows in Ireland, England, France, Belgium, The Netherlands, the USA, Georgia, and China. More information about my work can be seen in the Exhibitions section of this website and also at the Olivier Cornet Gallery in Great Denmark Street, Dublin 1 see: https://www.oliviercornetgallery.com/